Lantana Man Injured After Semi-Trailer Truck Crash On I-95

At approximately 6 a.m., Tuesday, the driver of a tractor-trailer lost control of the truck and struck a pickup truck, before finally crashing into a concrete barrier. According to the Florida Highway Patrol, one person was transported to the hospital with serious injuries following the collision. 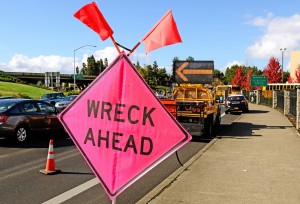 The accident occurred just south of the Lantana Road exit on I-95 northbound, FHP Lt. Alvaro Feola stated. The truck bore the logo of a beer company; however, it is not known whether it was transporting beer at the time of the crash.

Morning traffic was significantly impacted as a result of the accident. All southbound lanes were closed at the Lantana exit after concrete from the crash spilled onto the southbound lanes. Also, two left lanes were blocked northbound, which caused delays all the way to Gateway Boulevard.  This was according to the Florida Highway Patrol. The traffic congestion southbound stretched back to West Palm Beach.

Additionally, a crash on northbound I-95 near Gateway Boulevard caused further delays for commuters. FHP reported that the center lane of the highway was blocked. The left lane was still blocked on I-95 northbound in Lantana and delays remained backed to Gateway Boulevard.

FHP’s website announced that southbound lanes would reopen on I-95 in Lantana in five hours.

It is not known whether there were passengers in either vehicle, or the identity of the victim transported to the hospital. Officials are still investigating the cause of the crash. Furthermore, Lt. Feola stated that it is too soon to state whether either driver will face charges.

Accident attorney Jason Weisser of Schuler, Halvorson, Weisser, Zoeller and Overbeck responded to this unfortunate crash: “This is a serious accident that resulted in at least one person being transported to the hospital after sustaining injuries. We hope for everyone’s sake that investigators can quickly determine what caused the accident. Please be careful and obey the speed limits whenever you are driving a motorcycle, car, SUV or truck.”

Mr. Weisser added, “We hope that all parties involved consult with an experienced trial lawyer.  If you have been injured in an accident, call my office for a free consultation to find out what your rights are.”