According to the Florida Highway Patrol, the rollover accident took place near Mile Marker 34.

A holiday weekend drive ended in tragedy for a man and a woman who, officials said, died after their SUV veered off the Everglades Parkway in West Broward and ended up in a canal, Sunday. 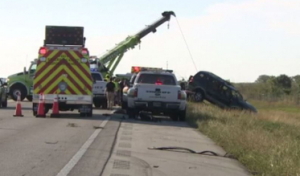 Investigators said the driver of a forest green Ford Explorer lost control of the vehicle, went through a fence and ended up going into the water. The SUV sank to the bottom.

Broward Sheriff Fire Rescue divers are searching through the hole in the fence where the victims’ Explorer appears to have gone through before going into the canal.  The SUV has been pulled from the canal using an extra large tow truck.

Florida Highway Patrol shut down all westbound lanes of the roadway while they investigated and cleared the scene, causing traffic congestion for many hours at this point. We are waiting for the roads to be opened back up on this busy holiday travel day.

Officials will not disclose the victim’s identities until after they notify next of kin.

Attorney Jason Weisser of Shuler, Halvorson, Weisser, Zoeller and Overbeck comments on this accident in west Broward County:  “This is a serious accident that unfortunately claimed two lifes.  We hope that the family can quickly find out the cause of the accident. If you’ve been injured in an accident, make sure you are properly represented by an experienced trial accident attorney.”

The post Man And Woman Both Died In SUV Crash Into Canal Off The Everglades Parkway In West Broward appeared first on Traffic Center.