A silver Toyota rear-ended a St. Lucie County School District school bus in Port St. Lucie. The crash happened when the Manatee Academy K-8 School bus stopped at a traffic light at the intersection of Del Rio and California Boulevards, Port St. Lucie police said. There were 37 students on board at the time of the accident.

The bus was transporting students from nearby Manatee Academy K-8, Master Sgt. Frank Sabol said. “It looks like the female drive that hit the bus may not have been paying full attention to the roadway,” Sabol said.

Police directed the Manatee Academy K-8 School bus driver to pull into a nearby Cumberland Farms parking lot after the crash. It is unknown if there were injuries in the school bus accident. 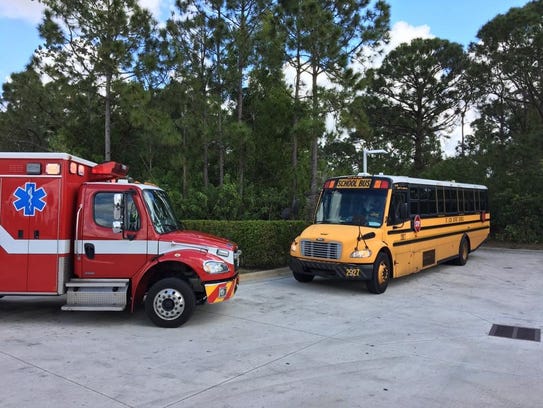 An official statement issued stated that, “St. Lucie County school bus Carrying 37 students was hit from behind while stopped on Dell Rio and California Boulevard. Police does not have information available on possible traffic violations.”

No further information is available at the time of filing this report. Authorities are investigating the crash.

Accident attorney Jason Weisser of Schuler, Halvorson, Weisser, Zoeller and Overbeck responded to this unfortunate crash. “This is a two-vehicle accident involving a school bus and 37 school aged children. We hope the investigators can quickly determine what caused the accident. Please be careful and obey the speed limits whenever you are driving a motorcycle, car, SUV or truck. We hope that all parties involved consult with an experienced trial lawyer. If you have been injured in an accident, call my office for a free consultation and find out what your rights are.”