Home > Blog > Uncategorized > Move Over For Emergency Workers On The Side Of The Road To Avoid Causing An Accident
Practice Areas
Locations
West Palm Beach, FL (Primary Location)

When you fail to Move Over, you put yourself and others at risk; you could crash into a vehicle or worker. 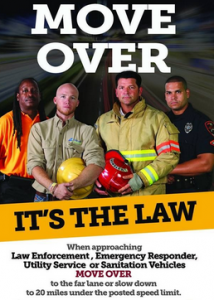 Violating the Move Over law will result in a fine, fees, and points on your driving record.  For more information, see section 316.126, Florida Statutes.

Attorney Jason Weisser of Shuler, Halvorson, Weisser, Zoeller and Overbeck wants to you to be aware of and to keep our first responders to the scene safe.  “If you see an accident up ahead on the road, as soon is its safe, move over to the lanes away from the accident.  One way you can do your part to keep our roads and highways safe is to by following Move Over Laws.  So when it is safe, move over.”

The post Move Over For Emergency Workers On The Side Of The Road To Avoid Causing An Accident appeared first on Traffic Center.