One Killed & Robert Racicot, and Celina Ruel Injured in Fiery Crash On I-95

A fiery crash on the southbound lanes of I-95 has left one person dead and two others injured, the Florida Highway Patrol said.

The deadly wreck happened by mile marker 62, on the southbound lanes of I-95, just north of the Indian River County border.

A semi-truck hauling hydrogen peroxide was heading south on I-95 when it suffered a tire tread separation and the driver lost control, according to FHP. This caused the truck to crash into a 2016 Hyundai Santa Fe.  Both vehicles veered toward the center median, went over the guardrail and the semi-truck caught fire. 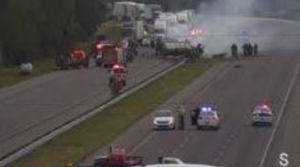 The driver of the semi-truck, a 63-year-old man from Tampa, died at the scene, the FHP said. The name of the driver hasn’t been released yet.

Robert Racicot, 69, and Celina Ruel, 61, both of Quebec, Canada, were injured.  They were driving a in the Hyundai at the time of the crash sustained serious injuries.  They were taken to Holmes Regional Medical Center.

The southbound lanes of the interstate 95 are currently closed while crews clean up the debris.  This route is closed due to the severity of the crash, causing traffic delays. Vehicles on this route are pulling to the roadside to allow crews work. The delay of traffic on this route is due to the severity of the crash. It is best to make use of alternative routes.  The Florida Turnpike would be your best alternate route.  The crash remains under investigation.

Attorney Jason Weisser of Schuler, Halvorson, Weisser, Zoeller and Overbeck responded about the crash.  “Cases involving accidents with commercial trucks are always subject to heightened scrutiny because of the additional regulations placed on drivers of those vehicles. Unfortunately in our practice,  we have seen numerous instances where drivers blatantly violate these regulations, which results in catastrophic consequences.  Hopefully the investigation reveals if the tires were worn past their limit or not at the time of the crash.  If you have been injured in an accident, call my office for a free consultation to find out what are your rights”.

The post One Killed & Robert Racicot, and Celina Ruel Injured in Fiery Crash On I-95 appeared first on Traffic Center.