Passenger In Critical Condition After Car Crash On Kings Highway

A front seat passenger in a Buick Sedan was airlifted after sustaining severe injuries in a car crash on Kings Highway in Vero Beach. 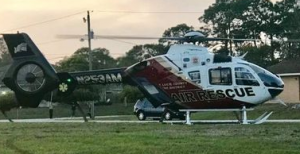 Emergency services were on ground after a crash involving a Buick Sedan close to Carter Road. The driver of the Buick Sedan was traveling on the southbound lane of Kings Highway when he lost control, skidded of the road and crashed into a tree a couple of feet from the road.

There were two occupants of the vehicle, a 54 year old man and a 45 year old woman. They both sustained severe injuries in the crash.

The Buick Sedan was found in a wrecked state when Firemen arrived and one of the passengers, the 45 year old woman, was trapped in the vehicle. Firemen were seen working to evacuate the trapped woman for over an hour. She was finally rescued and attended to by paramedics on the scene.

Police say she sustained multiple fractures, head trauma and was slipping in and out of consciousness while medical services were being rendered. An medivac arrived at the scene and she was airlifted to a hospital for treatment. The driver of the vehicle, the 54 year old man also sustained severe injuries in the crash and was taken to the hospital.

According to authorities, it is still unconfirmed if substance abuse or speeding will be considered as factors in the crash. More information will be provided as investigations proceed.

Accident attorney Jason Weisser of Schuler, Halvorson, Weisser, Zoeller and Overbeck responded to this unfortunate crash. “This is a serious accident involving one vehicle, which ultimately sent two people to the hospital with serious injuries. We wish the victims a quick recovery and hope the investigators can quickly determine what caused the accident. Please be careful and obey the speed limits whenever you are driving a car, motorcycle, SUV or truck. We hope that all parties involved consult with an experienced trial lawyer. If you have been injured in an accident, call my office for a free consultation and find out what your rights are.”