A West Palm Beach police officer was injured during a crash which occurred on Beeline Highway near Jog Road, according to Palm Beach County Sheriff’s Office. 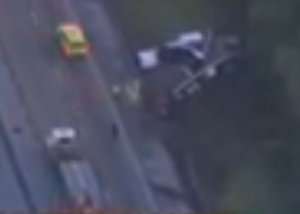 A semi-truck was struck by a passing pickup truck on Beeline Highway.  A police officer arrived at the scene and pulled over behind the semi to check on the both drivers.  As he was getting out of his patrol car Dodge Caravan slammed into the rear of the patrol car, injuring the officer.

The injured officer had been taken to the hospital by the trauma helicopter. He is listed in a stable condition, the sheriff’s office said.

According to the sheriff’s office, the westbound lanes of Beeline Highway were later shut down between North Lake Boulevard and Jog Road for at least three hours.

Accident attorney Jason Weisser of Schuler, Halvorson, Weisser, Zoeller and Overbeck responded to this unfortunate crash. “This is a serious accident involving a police officer, which ultimately, sent him to the hospital. We hope the investigators can quickly determine what caused the accident. Please be careful and obey the speed limits whenever you are driving a motorcycle, car, SUV or truck. We hope that all parties involved consult with an experienced trial lawyer. If you have been injured in an accident, call my office for a free consultation and find out what your rights are.”