A fatal wrong-way crash involving a 98-year-old driver resulted in the deaths of two teens and injured two others in St. Lucie County. 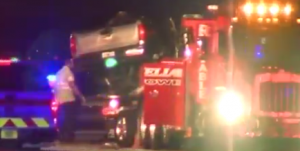 First emergency responders arrived at the site of the crash soon after the crash happened. Officials say two teens were pronounced dead at the scene and two other people were seriously injured.   The driver of the Chevy, 17-year-old Santia Myriah Feketa of Fort Pierce, and a passenger, 16-year-old Britney Lee Poindexter of Port St. Lucie, died in the crash.

Roney and a passenger in his vehicle, 75-year-old Carolyn Elizabeth-Evans Bruns of Michigan, were flown to Lawnwood Medical Center. Roney suffered critical injuries and Bruns had serious injuries.

Attorney Jason Weisser of Schuler, Halvorson, Weisser, Zoeller and Overbeck responded to this unfortunate accident in St. Lucie County:   “This is a tragic accident that resulted in a deaths and injuries.  It appears that it was caused by an elderly man driving an RV.  It is very tragic to have teens die and injured at such an early part of their lives.  Our deepest condolences go out to the families during this time of unbelievable loss.  It will also surely bring up the debate about elderly drivers on our roads.  Please be careful whenever you are driving a motorcycle, car, SUV or any oversized vehicle.  The parties involved should contact an experienced trial lawyer to fully understand your rights.  If you have been injured in an accident, call my office for a free consultation to find out what are your rights”.