Miami Gardens Police and Fire rescue units were called to the scene of a reported accident involving a school bus in Miami Gardens.

The crash occurred at the intersection of Northwest 13th Avenue and 215th Street, where two cars and one school bus had crashed. 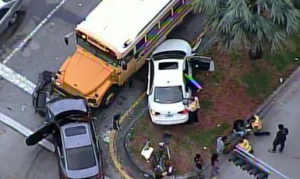 Police are still investigating what caused this accident with injuries in Miami Gardens but it appears one of the drivers of the cars was as fault and possible charges are pending.

Drivers have been advised to avoid the area until investigators have cleared the scene.

Attorney Jason Weisser of Shuler, Halvorson, Weisser, Zoeller and Overbeck comments on this accident involving a school bus in Miami Gardens:  “It is always sad when there is an accident involving children and we hope there are no serious injuries.   We also hope that it wasn’t caused by distracted driving.  If you’ve been injured in an accident, make sure you are properly represented by an experienced trial accident attorney.”