Four students traveling in a school bus narrowly escaped injury when the bus crashed into a car, according to Port St. Lucie police. 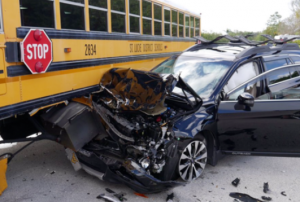 The incident occurred near SW Kestor Drive and SW Becker Road, police said.  The students were on the bus, in their seats, when an SUV collided with them.

The bus, heading north, was crossing the intersection with a green light.  Then a woman driving the SUV east on Becker Road T-boned the bus, according to police.  A station officer from the local fire rescue spoke to reporters at the scene and said the four students escaped injury. However, both drivers suffered injuries, he added.  By the time emergency services arrived, the school bus had been emptied of the pupils. The driver was still on the bus and there was a casualty in the SUV – the SUV driver.

The bus driver and the driver of the SUV were both transported to the hospital for medical treatment.

The pupils took shelter in a nearby gas station where paramedics assessed them clinically.  They were checking for any sign of injuries or shock and declared them fit.  Reacting to the incidence, the St. Lucie County School principal told newsmen that four pupils were on their way to school in the area when the incident happened. He, however, reiterated that the pupils were okay.

Attorney Jason Weisser of Schuler, Halvorson, Weisser, Zoeller and Overbeck comments on this accident involving a school bus in Port St. Lucie:  “It is always sad when there is an accident involving children and we are very happy none were hurt in the crash.   We also hope that it wasn’t caused by distracted driving.  If you’ve been injured in an accident, make sure you are properly represented by an experienced trial accident attorney.”