Three people have been taken to the hospital after a fiery crash that happened at Port St. Lucie Boulevard and South West Cameo Boulevard. 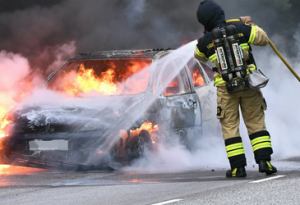 A 25-year-old man has been transported to the hospital after a fiery car crash that happened on Southwest Port St. Lucie Boulevard.

Another 25-year old man was driving east on the Port St. Lucie Boulevard when his 2010 white Mazda collided with the right side of the Kia, Port St. Lucie police reported.

Both vehicles had lost control and had crashed into an utility pole at the southeast corner of the intersection. The Kia caught fire and the victims were pulled out from the vehicle by first emergency responders, according to Port St. Lucie spokesman Master Sgt. Frank Sabol.

The two victims are still in a critical condition in the hospital, police added.  The crash is still under investigation.

Accident attorney Jason Weisser of Schuler, Halvorson, Weisser, Zoeller and Overbeck responded to this unfortunate crash. “This is a serious fiery accident involving two vehicles, which ultimately led to a fire. We hope the investigators can quickly determine what caused the accident. Please be careful and obey the speed limits whenever you are driving a motorcycle, car, SUV or truck. We hope that all parties involved consult with an experienced trial lawyer. If you have been injured in an accident, call my office for a free consultation and find out what your rights are.”