In Royal Palm Beach, three people were injured due to a car crash involving two vehicles.

According to a PBSO report, a 31 year old man from suburban West Palm Beach was driving westbound in a 2017 Infiniti Q50 on Okeechobee Boulevard near Wildcat Way.  PBSO said it appeared that he may have been traveling at high speed when he lost control of the vehicle and traveled across the westbound lanes of Okeechobee Boulevard. 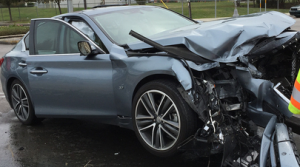 The car swerved sideways before it violently slammed into another vehicle – a red 2014 Toyota Corolla. The impact of the collision disabled the Corolla with damage along the whole side  passenger door.  The Infiniti continued to slide sideways across the sidewalk and grassland, before it was halted by a palm tree on the north side of Okeechobee Boulevard.

The Toyota driver and his passenger, Andy Paige, 23, of Tampa suffered serious injuries. Both victims were wearing seatbelts at the time of the crash. Fire Rescue responded and transported the victims to the hospital. Paige suffered a dislocation of the shoulder joint and rib fracture while the driver suffered a concussion.

The Infiniti driver sustained some injuries as well. However, his condition is unknown at the time of this report.  Okeechobee Boulevard near Wildcat Way will remain closed until authorities are able to clear the scene.

Accident attorney Jason Weisser of Schuler, Halvorson, Weisser, Zoeller and Overbeck responded to this unfortunate crash:   “This is serious accident with injuries in West Palm Beach.   We hope for everyones sake that it can be quickly discovered what the cause was.  It has been indicated that the driver may have been traveling at a high rate of speed.  Please be careful and obey the speed limits whenever you are driving a motorcycle, car, SUV or truck. This is especially true when there are children in the area.  We hope that all parties involved consult with an experienced trial lawyer.  If you have been injured in an accident, call my office for a free consultation to find out what are your rights”.