Three separate drivers crashed into two patrol cars for the Martin County Police Department. According to the Florida Highway Patrol. 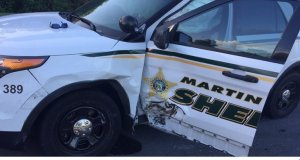 The crashes happened on the Jensen Beach Causeway in Martin County.

Florida Highway Patrol officials reported one patrol car stopped to investigate a crash when a driver crashed into the car. The driver said he glanced down to look at his cellphone.

Two additional police officers responded to the scene when a second and third driver crashed into one of those cars.

The Martin County police department said, the driver in the second collision said he fell asleep at the wheel. Police officials said, the officers were on the side of the road with their emergency lights flashing when two different cars crashed into them.

The Martin County Police Department said, the officers suffered non-life threatening injuries and have been taken to a nearby hospital. Florida Highway Patrol officials advised readers to move over when you see police officers or tow trucks on the side of the road.