Tractor-Trailer And Car Accident On U.S. 27 Shuts Down Road As Trauma Hawk Rushes Injured To Hospital

The Palm Beach County Sheriff’s Office said northbound U.S. 27 is shut down Friday morning south of South Bay because of a crash involving a semi and car.

There were many first responders from both the Palm Beach Sheriff’s Office and from Palm Beach County Fire Rescue on the scene to help the injured.

First responders were able to remove one person from a car that was pinned underneath the semi. The victim was later flown by Trauma Hawk to an area hospital. 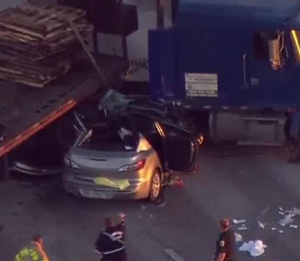 At this time it is unclear what caused this major accident involving these 2 vehicles.

U.S. 27 is currently shut down and authorities have not yet given an estimated time of when the road will reopen.

Attorney Jason Weisser of Shuler, Halvorson, Weisser, Zoeller and Overbeck responded to this unfortunate accident in western Palm Beach County:   “It is unclear what has caused this very serious accident with injuries today.  We hope it wasn’t from distracted driving.  If you have been injured in an accident, call my office for a free consultation to find out what are your rights”.

The post Tractor-Trailer And Car Accident On U.S. 27 Shuts Down Road As Trauma Hawk Rushes Injured To Hospital appeared first on Traffic Center.