The St. Lucie County family escaped their kidnapper only to get picked up by a truck and suffer injuries in a crash. 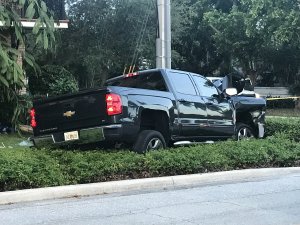 Police say it began when a woman, her 6-week-old infant, and her father who were kidnapped from their St. Lucie County home and forced into a vehicle, said the FHP. The father, who was placed in the trunk, escaped from the vehicle. He was able to rescue the woman and infant, police say. Uninjured, all three were picked up by a man in a truck. A BMW crashed into the back of the truck and wound up in a ditch.

Police found a man, two women and two female youths inside the crashed white BMW.  All five were injured and transported to a nearby hospital.  The victims in the truck suffered minor injuries and were treated at the scene.

Police haven’t disclosed the cause of the crash but believe drugs and alcohol may have been involved.  The kidnap victims are recovering. Police are still investigating the incident and searching for the person responsible.

Accident attorney Jason Weisser of Schuler, Halvorson, Weisser, Zoeller and Overbeck responded to this unfortunate crash. “This is a serious accident involving several people resulting in injuries. We hope the investigators can quickly determine what caused the accident. Please be careful and obey the speed limits whenever you are driving a motorcycle, car, SUV or truck. We hope that all parties involved consult with an experienced trial lawyer. If you have been injured in an accident, call my office for a free consultation and find out what your rights are.”