Two Horses Killed, Riders Hospitalized After Being Hit By Car On 45th Street and Greenwood Avenue

A crash on the intersection of 45th Street and Greenwood Avenue left two horses dead and sent a girl and woman to the hospital. 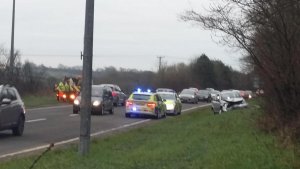 A woman, 62, and her 9-year-old granddaughter were riding horses on Greenwood Avenue when a 24-year-old man struck them with his 2008 Toyota Tundra, according to the West Palm Beach Police Department.

The driver had dropped his cell phone and bent over to pick it up while driving eastbound on 45th Street, leading to the crash at the intersection with Greenwood Avenue, police said.

The woman and the girl were on the horses crossing Greenwood Avenue when the truck hit them, the West Palm Beach Police Department said.

The girl, whose name hasn’t been released by police, was flown to a Regional Hospital. Her father was present during the accident and went to the hospital to be with her, police said. The girl was wearing a helmet, which “may have saved her life,” said Palm Beach Police.

Her grandmother was taken by ambulance to the hospital and is in a critical condition.

Police are investigating whether speed was a factor in the crash, he said. Traffic signals are not working at the intersection and it that could also be a factor. The driver could face charges, police said.

Accident attorney Jason Weisser of Schuler, Halvorson, Weisser, Zoeller and Overbeck responded to this unfortunate crash. “This is a serious accident involving two horses, which ultimately, resulted in injuries. We wish the victims a speedy recovery and hope the investigators can quickly determine what caused the accident. Please be careful and obey the speed limits whenever you are driving a motorcycle, car, SUV or truck. We hope that all parties involved consult with an experienced trial lawyer. If you have been injured in an accident, call my office for a free consultation and find out what your rights are.”