A bus driver and a passenger got injured after a Toyota fleeing from a traffic stop crashed into a paratransit bus for disabled people, the Boynton Beach Police Department reported.

The crash occurred in the 2000 block of Federal Highway, south of East Woolbright Road. Describing what led to the incident, Stephanie Slater, a spokeswoman for the Boynton Beach Police Department said that the driver of a Toyota Camry fled from a traffic stop and crashed into a Palm Tran Connection bus. 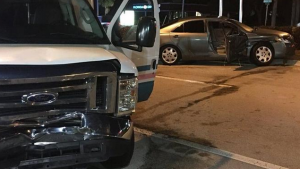 First emergency responders arrived at the site of the crash soon after the crash happened.  The bus driver and his passenger were transported to a local hospital.  They both had injuries that were not life-threatening, said Stephanie Slater.

The driver and the passenger in the car, which crashed into the Palm bus,  ran after the crash. A police dog was deployed to run after them and it helped in capturing the driver. The passenger was also apprehended, Slater reported.

East Woolbright Road was closed as investigators and rescue team worked, Boynton Beach County Police department said. This led to a substantial delay in traffic. We expect the road to open after some hours.

The cause of the crash is still under investigation, according to the report.  This story will be updated as more information is released.

Accident attorney Jason Weisser of Schuler, Halvorson, Weisser, Zoeller and Overbeck responded to this unfortunate crash:   “This is a tragic accident and especially sad when it involves people with disabilities.  We hope that justice is quickly served on those that caused the crash.  Please be careful whenever you are driving a motorcycle, car, SUV or truck. This is especially true when there are children are involved.  We hope that all parties involved consult with an experienced trial lawyer.  If you have been injured in an accident, call my office for a free consultation to find out what are your rights”.

The post Two Injured After Car Fleeing Crashes Into Bus For Disabled In Boynton Bch appeared first on Traffic Center.