This is a serious accident that has lanes closed on Northlake Boulevard in Palm Beach County.

A 21-year-old man was driving east on Northlake Boulevard when he lost control of his speeding 2016 Chevrolet Camaro on the wet roadway and spun out, according to the Palm Beach Sheriff’s Office report. 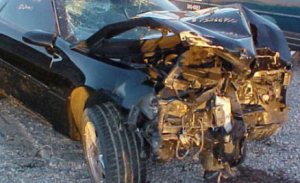 The Chevrolet went off the road and hit a Hyundai Genesis driven by a Connecticut woman. The impact of the collision sent the Hyundai off the road, hitting two standing trees across the sidewalk.

His passenger, an 18 year old Connecticut woman, died instantly, as did a still-unidentified 24-year-old man in the front seat.  The driver of the Hyundai Genesis was seriously injured in the crash. She was heading north on Coconut Blvd just around Coconut Park when the Chevrolet hit her car.  Sitting in the back seat of the Hyundai, there was a 22 year old woman from Wellington that was also seriously injured. She has been airlifted to St. Mary’s Medical Center.

Police and emergency personnel responded to the crash. According to the release, the other victims of the crash are yet to be identified.  The Palm Beach County Sheriff’s Office was assisted at the scene by the Fire Department and First Responders.

The crash remains under investigation. This story will be updated as additional information is passed on from the sheriff’s office.

West Palm Beach attorney Jason Weisser of Schuler, Halvorson, Weisser, Zoeller and Overbeck responded to crash with 2 death:   “This is a tragic accident here in Palm Beach County.  For the families sake, we hope that it can be quickly discovered what the cause was.   We also hope that experienced trial lawyers are hired to represent the victims in this crash.  Please be careful whenever you are driving a motorcycle, car, SUV or truck.  If you have been injured in an accident, call my office for a free consultation to find out what are your rights”.

The post Two People Have Died In Crash On Northlake Blvd In North Palm Beach appeared first on Traffic Center.