Many people were injured after a two-vehicle crash in Delray Beach, police said. One of the vehicles crashed into a nearby house. 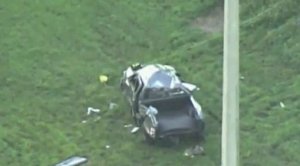 The two-vehicle accident occurred at Northeast 3rd and 1st Avenue. According to the police, who were on the scene for hours, two people in a SUV were seriously injured and transported to Delray Medical Center. In the second vehicle, a black pickup truck, were seven people. According to police, four of the seven passengers suffered minor injuries.

A witness who resides nearby and saw the aftermath of the crash said, “Driving past at about 5:00, I saw this pickup truck pretty far up onto the sidewalk. I saw that it was pretty banged up. I got to the side and saw the airbags were deployed and people who looked fairly injured were stumbling out of the truck. It looked like a pretty bad scene. I could not see the SUV. I thought it was just a single vehicle accident. It was very confusing.”

Delray Beach Police are investigating the cause of the crash.

Accident attorney Jason Weisser of Schuler, Halvorson, Weisser, Zoeller and Overbeck responded to this unfortunate crash. “This is a serious Delray beach accident involving two vehicles, which ultimately, caused serious injuries to a lot of people. A nearby house was also affected in the crash. We hope the investigators can quickly determine what caused the accident so that the family and friends of the victims can get justice and have a closure. Please be careful and obey the speed limits whenever you are driving a motorcycle, car, SUV or truck. We hope that all parties involved consult with an experienced trial lawyer. If you have been injured in an accident, call my office for a free consultation and find out what your rights are.”