William Brennan Dies In Crash on I-95 in West Palm Beach. Others Injured

A crash on the southbound lanes of I-95 is blocking the two left lanes, just north of Hypoluxo Road, the Florida Highway Patrol is reporting.

The wreck happened just north of the Hypoluxo Road exit ramp of I-95.   William Brennan, age 44, was killed in the crash, the Florida Highway Patrol said. 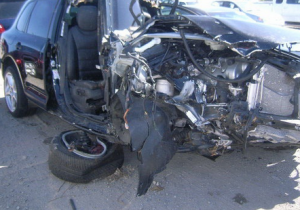 Troopers said an unnamed man was driving a BMW X4 south on Interstate 95 and lrecklessly at high speed and was fleeing a traffic stop.

He lost control of the vehicle and crashed into a Porsche driven by Shawn Milsner, of Boca Raton, according to the crash report.

William Brennan was an occupant of the Porsche and unfortunately he died immediately. The other passenger sustained serious injuries.

The BMW further flipped onto a grassy shoulder moments after the crash and the driver was ejected from it, the Highway Patrol said. He sustained life-threatening injuries.

First emergency responders arrived at the site of the crash soon after the accident happened.  These victims were transported to the hospital.

This route is partially closed due to the severity of the crash, causing traffic delays. It is best to exit I-95 via Lantana Road in the north and W Boyton Beach Blvd in the south.  Your alternative routes to avoid this accident with injuries is to take Congress Blvd or Military Trail.  You can also take the Florida Turnpike if you prefer to take a highway.

West Palm Beach attorney Jason Weisser of Schuler, Halvorson, Weisser, Zoeller and Overbeck responded to this unfortunate accident with a death of Mr. Brennan:   “This is a tragic accident here in West Palm Beach.  We hope for the families benefit that it can be quickly discovered what the cause was.   Please be careful whenever you are driving a motorcycle, car, SUV or truck. This is especially true when you are traveling at high speeds on highways.  If you have been injured in an accident, call my office for a free consultation to find out what your rights are”.

The post William Brennan Dies In Crash on I-95 in West Palm Beach. Others Injured appeared first on Traffic Center.