commAn 85-year-old woman was hospitalized after the car she was riding in crashed into another car making a left turn at a Pembroke Pines intersection, authorities said.

The crash happened at Sheridan Street and Dykes Road as Sherryl Smith, 30, of Taft, attempted a left turn in a 2007 Nissan, said Sgt. Adam Feiner, of the Pembroke Pines Police Department.  She had injuries that appeared to be major.  She needed to be taken to a hospital, Feiner said.  Smith was turning from westbound Sheridan Street to go south on Dykes Road.  This is when she collided with an eastbound 2017 Toyota, Feiner said. Both cars were severely damaged. 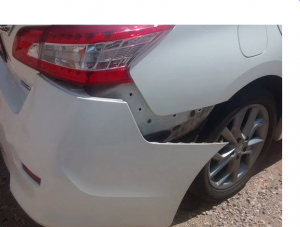 The driver of the Toyota, Amber Brown, 23, of Pembroke Pines, and her passengers William Lewis, 24, and two juvenile girls, were evaluated by paramedics on scene. One of the girls had serious enough injuries that she had to be taken by Fire Rescue  to the hospital, Feiner said.  The driver, Ms. Brown, had minor injuries and was being treated at the scene, Feiner added.

The crash was tying up traffic at the intersection, which is between Sheridan Street and Dykes Road. Motorists were being detoured as investigators remained at the crash scene.

Car Crash Attorney Jason Weisser of Schuler, Halvorson, Weisser, Zoeller and Overbeck responds.  “This is a tragic accident here in Palm Beach County.  It is especially unsettling to see seniors hurt.  We hope that everyone involved makes a speedy recovery and their injures are not permanent.   Please be careful whenever you are driving a motorcycle, car, SUV or truck.  If you have been injured in an accident, call my office for a free consultation to find out what are your rights”.