The accident,  involved a 2017 Chevrolet Camaro, a 2004 Suzuki Aerio, and a 2017 Volkswagen Passat.  It happened at the Okeechobee Boulevard near the intersection of North Military Trail. 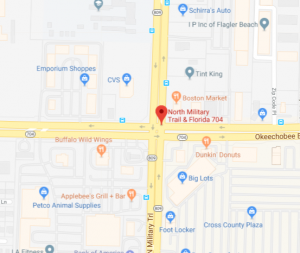 The driver of the Chevrolet Camaro lost control while heading east on Okeechobee Boulevard.  Then it hit a road median. The driver swerved right and then hit a Suzuki Aerio which was headed west. This sent the Aerio over the median and it crashed into the driver’s side of a Volkswagen Passat.

None of the other two drivers was injured in the crash, which killed Yefim Bogomolsky, the sheriff’s office said. Records indicate he was wearing a seat belt at the time, as was his passenger.

The Palm Beach County Sheriff’s Office currently has closed Okeechobee Boulevard currently. The closure is near the intersection of North Military Trail because of this crash.  We suggest that you avoid this route and take Haverhill Road as your alternate.  Use extra caution because of the first responders that are on the scene clearing this accident with injuries.

Attorney Jason Weisser of Schuler, Halvorson, Weisser, Zoeller and Overbeck comments on this accident that left two dead in West Palm Beach, Florida:  “This is a serious accident that unfortunately left two seniors dead.  We hope feel for their families in this time of loss.   If you’ve been injured in an accident, make sure you are properly represented by an experienced trial accident attorney.”